Fushimi, the City of Water.    Fushimi used to be written “伏水”; meaning underflowing water or underground water.   This short essay lights up the relationship between Nayamachi Shopping Street and Water, and the product of water -sake.

There is no doubt that the fact that  rich good quality underground water is easily obtainable in Fushimi is the major reason of development of sake industry in Fushimi, which still is one of the major industry of Fushimi.  Nayamachi Shopping Street also has had benefit from it.

As the sake brewing industry develops, so does the businesses that brewers be their clients.   There used to be many bamboo/woodwork factories in Fushimi who provides the brewers with sake-making equipment, or roof tile factories that maintain the roof of sake factory.    A owner of  a fish store in Nayamachi (closed business already) used to say that she delivered large amount of fish to brewery kitchens everyday for the workers who come from local areas and stay for whole sake-making season (basically winter). 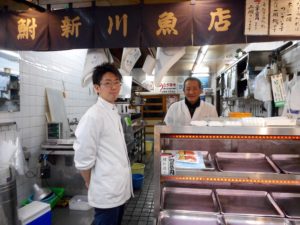 An example of eating freshwater fish culture is simmering wolf that people eat at new year holidays.    Numerous number of customers can be seen in Nayamachi at year end who came long way for the simmering wolf.   Another example is eel that people eat at a special day 土用の丑の日 in Summer.     At Funashin freshwater fish specialty store, an artisan clean eel as many as 1000 eels on the day.   The techniques to process freshwater fish for preservation also developed, such as Tsukudani: boiling fish in soy sauce.   ‘Ebimame’ is an example of them: a dish that boiled soy bean and river shrimp together in soy sauce.

Brewers are not the only person who uses affluent underground water.  The freshwater fish specialty store also has a water well in their shop and let living fish swim in pool.   Even the Kimono shop in Nayamachi has water well in their house, but I believe this does not relevant to their business directly.

When we say Fushimi as a city of water,  we should not disregard the viewpoint from logistics and transportation.

To Osaka, river is connected from the port of Fushimi to Uji River and Yodo River.  To Kyoto, Takasegawa canal is connected from the port of Fushimi to central Kyoto.
Fushimi has been the relay point of the two biggest consumption city in Kansai – Osaka and Kyoto by river and canal, and this was the biggest reason Fushimi has developed as town of logistics and transportation where people and goods gather.   ‘Naya（納屋）’ of Nayamachi means warehouse.   We can see the remnant of port town Fushimi here.

Behind the development of sake industry, we can imagine that there were certain demands of alcohol beverages for the people who sleep at the port town.   Indeed, several brewers in Fushimi started their businesses from accommodation industry.   Also, to transport rice, which is substantial material to make sake, and to sell sake,  the brewing factories must be located where transportation is convenient.   Fushimi had competitive advantage on that point with canals, moats and rivers.

Nayamachi Shopping Street has evolved as an entrance and warehouse of the port town throughout Edo period.   It lasts until the railways overtook riverboats after late Meiji.

Sake Festival in Fushimi on March 23