Nayamacchi’ sake is an official product of Nayamachi Shopping Street Association.   It is sold at our office at 2,100 yen for a set of 3 small bottles:  Junmai Ginjo（純米吟醸）、Ginjo（吟醸酒）and Namachozo（生貯蔵- pasterized before shipping)。 Please taste the smooth and mellow sake with rich aroma and umami (savory) made in Fushimi.

The sake is actually made by Yamamoto Honke Sake Brewery, which is located only a few minutes walk away from Nayamachi Shopping Street.

In 1677 (the 5th year of the Enpō era) the 4th generation of the Tokugawa Sogunate’s family, 山本本家 Yamamoto Honke Sake Brewery started trading in what is now known as the Kyoto and Fushimi area.  The head of the family has been inheriting its first name ‘Genbee’ and is currently in its 11th generation of Genbee.   The headquarter building of it was rebuilt in 1868, when the battle of Toba-Fushimi took place and original building was burned to the ground due to the war.   Yamamoto Honke has accompanied the growth of Kyoto’s cuisine and has continued to make sake so that everyone can enjoy it along with their meals.   It sells its sake in 神聖 (Shinsei) and 松の翠 (Matsunomidori) brand name. 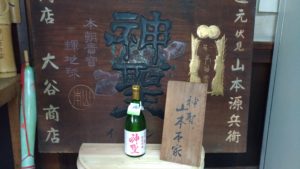 白楽天 Bai Ju-yi, a famous Chinese poet from the Tang Dynasty, once said in a verse from his poem “The melancholy of singing with sake while waiting for the neverending rain to cease” that “頼に杯中に神聖なるもの有り、百憂も充分奈何ともする無し: There’s something sacred in a cup of sake, and not even a hundred sorrows can do anything about it.” (This means that, thankfully, we have this sacred (sake) and that not even a hundred sorrows can win against it) which is where Shinsei got its name.

Fushimi, Kyoto is located to the south of the Kyoto basin and is a groundwater reservoir that has been flowing for many years.  The 白菊水 “Shiragikusui water” that is used by Yamahoto Honke for sake brewing is low in iron and contains an appropriate amount of minerals which give it a rich taste and a mellow aftertaste.   It is natural groundwater suitable for the making of sake that can be perfectly paired with a meal. 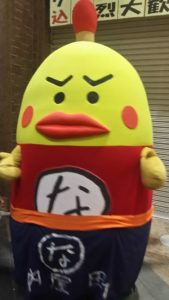 By the way, Nayamacchi is an mascot character of Nayamacchi Shopping Street Association.  He’s a hot and vibrant guy who keeps Nayamachi Shopping Street on fire!   Nayamacchi wears an apron around his waist with the symbol ‘な（NA）’ for Nayamachi. His special power stems from his (match) head that strikes flames into the hearts of shoppers everywhere.   He came from outer space to help Nayamachi and town of Fushimi.   He admires Ryoma Sakamoto, a revolutionalist who played a big role in ending Tokugawa shogunate, which lead Japan to become modern nation of Meiji.  His favorite food is curry.

Sake Festival in Fushimi on March 23